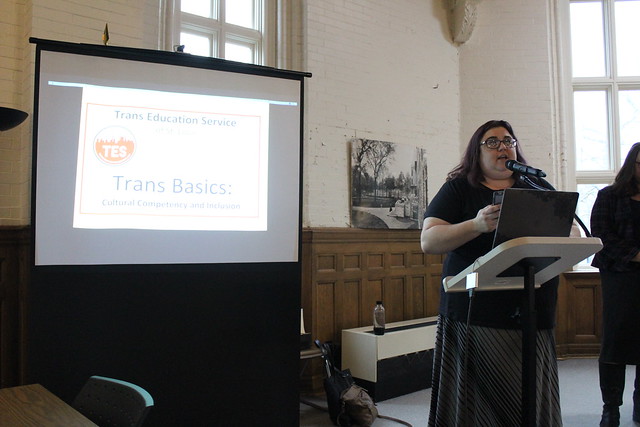 Lewis and Clark kicked off LGBTQ+ Health Awareness Week with a presentation by Jaimie Hileman in Reid Memorial Library. The presentation, titled Trans Basics, covered cultural competency about issues related to transgender people, as well as advice for better inclusion.

“The terminology comes from a selection of scientific, academic, advocacy, and real-world experiences,” Hileman explained.

She also discussed the differences between sex and gender, and between gender identity and gender expression.

She next explained some best practices for inclusion. One example was a name tag with space to write a name and gender pronouns. She also advised the audience to avoid “non-pliments” such as, “I would never have guessed you were born a man!” which may be well-intentioned but can be patronizing or insulting.

A key part of inclusion, according to Hileman, is asking appropriate questions.

For example: “If Joe the plumber is working on my sink, maybe he clocks me as trans so he asks ‘Have you had the operation?’. That is not appropriate. Joe doesn’t need to know anything about my ‘plumbing’ to fix my plumbing!” Instead, Hilman advised a more thoughtful approach, including asking open-ended questions and considering your relationship to the trans person in question.

A more personal and emotional part of the presentation came when Hileman shared the story of how she came out to her parents. She described how her mother began the conversation with some leading questions.

“I started crying,” Hileman said. “I felt like I had lost the ability to speak. I felt like where my larynx was supposed to be was a lump of cold stone. She said, ‘What’s wrong?’. I can’t tell her because I can’t speak, I can’t talk.” She did eventually open up and her mother was supportive. “Years later we looked back on that moment and realized it was our first mother-daughter conversation.”

Hileman said that though she was at first reluctant to share these sensitive memories, she finds that including her personal story is an essential part of trans education.

“A cisgender person could give almost this same presentation about terms and so on,” Hileman said. “But what’s missing is the real, lived experience of being trans. And that’s what the audience really connects to, and what humanizes trans experiences for them.”

Hileman says that the Trans Basics presentation comes from the Metro Trans Umbrella Group, the largest trans advocacy organization in the St. Louis area. MTUG’s Trans 101 presentation was created based on guidelines developed by the National Center for Transgender Equality.  Hileman was Board President and Co-Executive Director of MTUG before leaving to launch Trans Education Service of St. Louis, LLC in 2016. While she still works with MTUG on occasion, she is proud of her new company’s approach. “TES is a little nimbler because we can work with a variety of clients from the corporate world, to medical and educational settings, to nonprofits,” Hileman said.

Hileman also said this event was a little different from her usual work. “About a third of my clients are corporate. So they’re often more focused on, for example, solutions to workplace issues. They have specific questions such as how to run inclusive meetings,” she said. The Lewis and Clark event, on the other hand, ended with questions about LGBT and transgender support services in the area. Hileman suggested a few, including MTUG, and pointed the audience to TES’s website, transedservice.com for a list of resources.