In the final Board of Trustees meeting of 2019, Lewis and Clark’s BOT voted unanimously to remove President Dale Chapman from his 30-year career at Lewis and Clark Community College, via a separation resignation agreement.

At the Dec. 10 meeting, the BOT removed Chapman before he could finish his contract and see through his final semester at L&C. Yet before this decision was made the BOT had to listen to the public comments at the beginning of the meeting. The first to address this issue was L&C’s President of the Student Government Association Ashtyn E. Britt.

“You may remember me from a few meetings or so ago, where I told you all that the community and the students had their eyes on you,” Britt said. “Well, now we’ve seen enough. I, along with many others in the community have/had also implored you to consider your decision of not renewing Dr. Dale Chapman’s contract, which you’ve clearly ignored. Why are we doing this all over again? Why fire a good man from his job, which he is good at, before his literal last semester here? You’ve already gotten what you wanted. Let the school have this last semester to give him a proper goodbye.”

Retired Judge Duane Bailey also returned to speak. Once again, Bailey asked the BOT to stop wasting time and tax dollars on the phone-book sized agendas, compared the situation to the impeachment of  President Donald Trump and expressed his overall concerns. 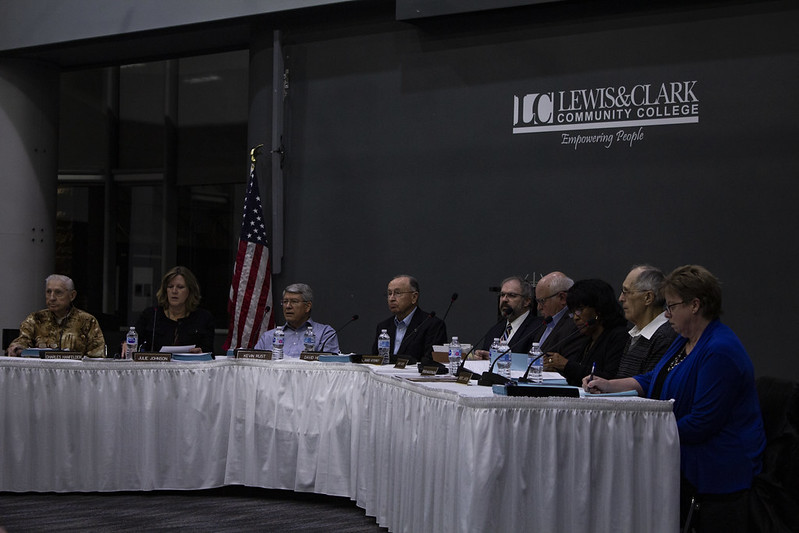 “You complain about buildings, but the buildings here are stellar compared to SWIC [Southwestern Illinois College],” Bailey said. “You complain about the faculty salaries, well I don’t think you have to worry about that. Quite a few faculty are gonna leave now, because they know they cannot trust this board to support whoever is the head of education here.”

L&C Nursing Learning Specialist Dawna Egellhoff was another returning speaker who voiced her opinion. At one point, Egellhoff reminded board member Julie Johnson that she was talking, and pointed out that she herself had more years of higher education than the four newest board members combined.

Founder and longtime CEO of FamilyFarms Group Allen Lash flew in from Texas to speak, as well.

“Please, please don’t judge the community by four ignoramuses,” Lash said speaking of the newest board members. “On second thought maybe that’s too big a word. Maybe, stupid or something else is more appropriate. I don’t mean to be disrespectful folks, but this university has been named one of the top 150 schools in the nation.”

The BOT went into an executive session and discussed either approving a separation and resignation agreement or to terminate the employment of President Chapman. This executive session lasted a little over two hours before they returned with their decision.

Chapman did not attend the meeting.