My first stop was at Heroic Adventures, 1005 Century Dr., Edwardsville, IL. They are conveniently located near Edwardsville High School and Southern Illinois University-Edwardsville.There are a large variety of restaurants nearby to grab a bite to eat after your shopping trip or game night.

Customers could choose three free comic books from a wide selection of titles, genres, and publishers. You could purchase additional Free Comic Book Day titles for $1.00 each, or peruse their wide selection of comic books, graphic novels, games, and miniature figures. They hold various events throughout the year, including weekly game nights.

Although the crowd was significantly smaller than pre-pandemic years, there was a steady flow of customers of all ages. Sadly, in this post-pandemic era, there weren’t any costumed characters at the event. However, this year Heroic Adventures brought back the annual Kids Design a Super Hero Contest. Anyone 12 and under could use their templates in the store to draw their own creation, giving them a costume, name, superpowers, back story, and anything else. Winners will be selected through voting on Facebook and the grand prize winner’s hero will become Heroic Adventures mascot for an entire year. 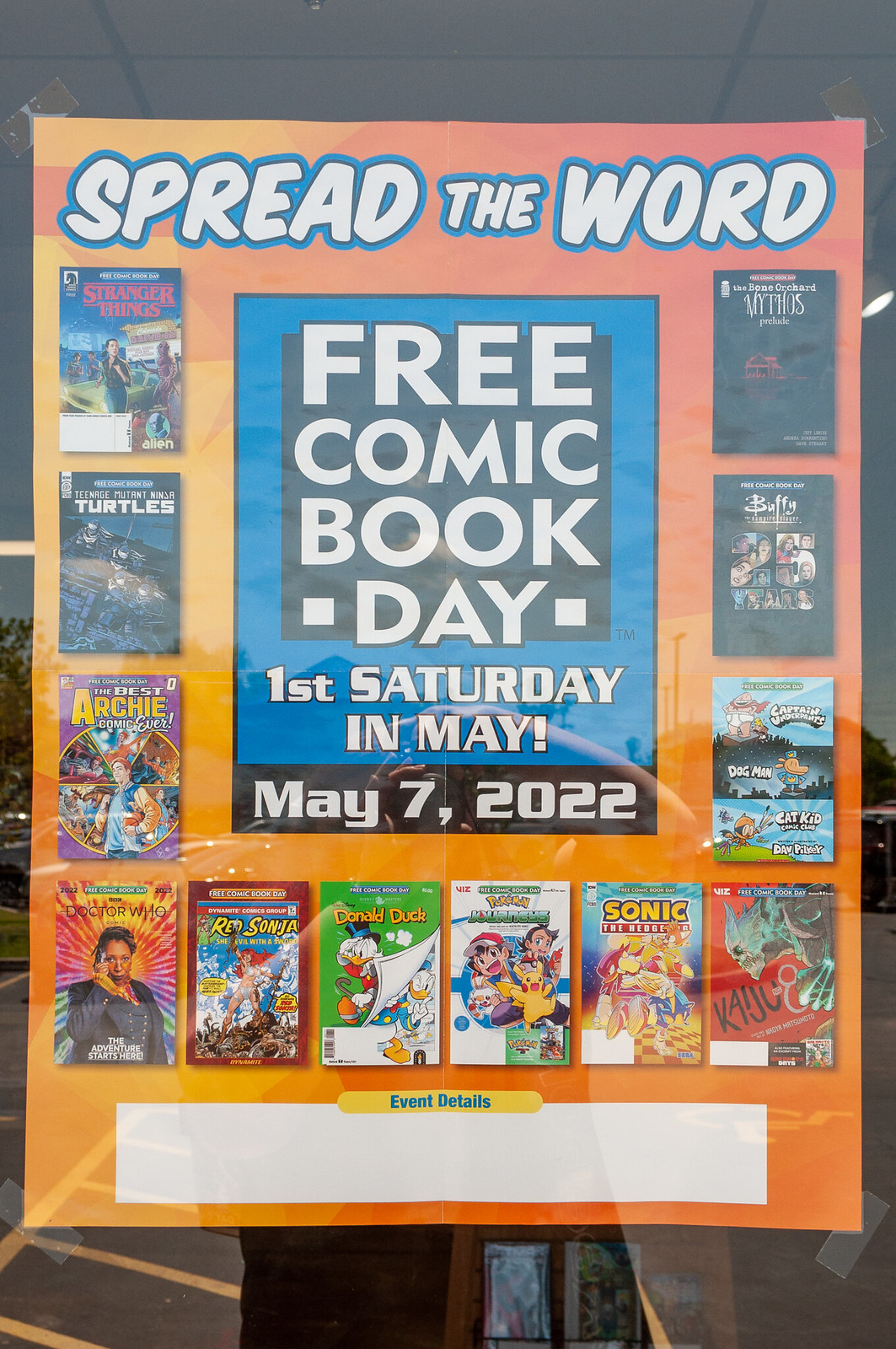 My second stop was at Otherside Games and Comics, 229 N. Main St., Edwardsville, IL. They are conveniently located in downtown Edwardsville.  Here, customers could choose four free comic books from a similar wide selection of titles, genres, and publishers. Otherside specializes in board games, card games, and miniatures, but they have a sizable collection of comic books and graphic novels as well. Otherside hold weekly game nights for a large variety of board games and card games.

Otherside Games and Comics didn’t have a large number of customers while I was there, but I’m sure that they had a steady stream throughout the day.

If you are a comic book fan, mark your calendar for this annual event on the first Saturday of May. Barring any pandemic setbacks, next year should be even more exciting.

Free Comic Book Day (FCBD) is the biggest event in the comic book industry—a single day when participating comic book specialty shops across North America and around the world give away comic books absolutely free to anyone who comes into their shops! Founded on the belief that for every person out there, there’s a comic book they’ll love, the annual event offers a huge selection of free titles designed to appeal to a broad range of age levels and their tastes.

Every year, on the first Saturday in May, the industry comes together to give away free comics and encourage both curious, first-time comic book readers and seasoned comic book fans to flock to the best place in the comic book community: local comic shops. Each one is unique in its community, with a style and personality all its own, and each one carries a full line of comics, graphic novels, toys and related products. Local comic shops are the hubs of our community, where fans can come together to discover new comics, make lifelong friends, and find a sense of commonality.

Major publishers such as DC Comics, Marvel Comics, Dark Horse Comics, IDW Publishing, BOOM! Studios, Dynamite Entertainment, and Image Comics, along with a slew of independent publishers, put out free comics for fans to enjoy at the more than 2,300 local comic shops that participate in Free Comic Book Day. The diverse range of titles available each year proves that there’s truly a book for everyone: from superheroes, to popular film and television shows, to beloved video games, and all-ages tales. Popular series available in the past include Pokemon, Doctor Who, SpongeBob, Teenage Mutant Ninja Turtles, Riverdale, Overwatch and Star Wars.